What is a Water Softener?

What is a water softener and how do they work? 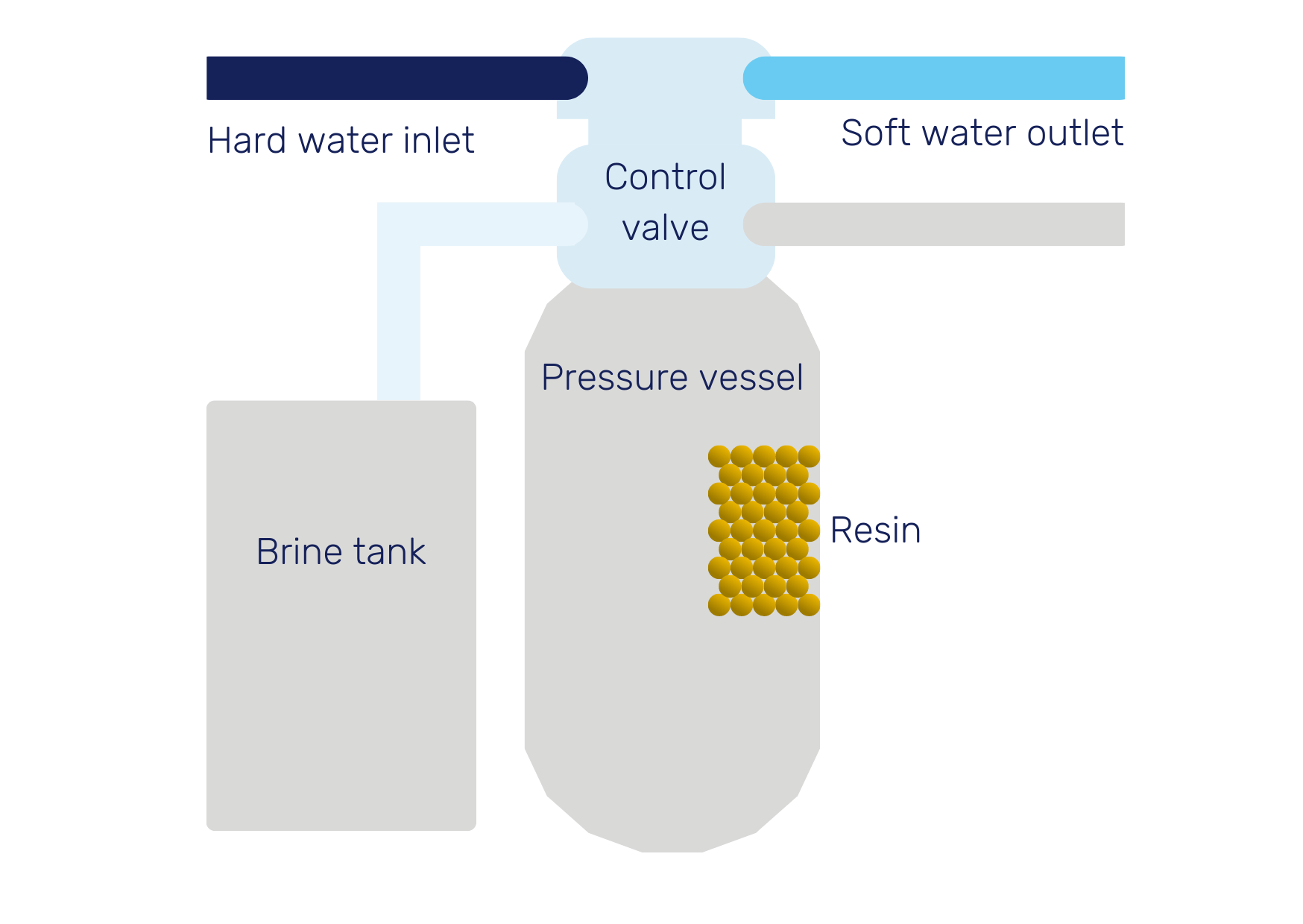 What is a water softener?

minerals that are found in hard water. The hard water enters your home, passes through the

water softener and softened water is flowed out through the plumbing to the rest of the property.

Whilst water softener design can vary they will all share the same main characteristics,

consisting of a control valve, a brine tank and a pressure vessel containing resin beads.

But why is hard water a problem?

minerals. The hardness of your water supply is dependent on the area in which you live and the

types of rocks which the rainwater is filtered through when it falls to the ground. When the

The effects of hard water on your home are pretty hard to miss. As soon as hard water comes

into contact with heat (such as your taps, Kettle, boiler or washing machine) you will get

limescale build up. Limescale is a hard, chalky deposit which bonds firmly to the surface it

appears on. Not only is it unsightly it can be a nightmare to clean, requiring harsh chemicals to

remove it. There are other serious consequences to limescale formation, namely in the

efficiency and lifespan of your appliances. For every 1 mm of limescale buildup on heating

elements an extra 10% of energy is required for it to function. Eventually the limescale will build

up to such an extent that the heating element will no longer work and will need to be replaced.

This can prove particularly costly if you need to replace the whole appliance.

appearance. It can also leave your skin feeling very dry and exacerbate skin conditions such as

How exactly does a water softener work?

minerals from the hard water. As the water enters your home it passes through the water

softener tanks which are filled with resin beads. The magnesium and calcium ions in the hard

water are attracted to these beads and are instead exchanged for sodium ions. This occurs as a

result of the positive or negative charge that the ions have. The magnesium and calcium ions

that can hold a positively charged ion. The positive sodium ions are initially held by the negative

resin site, a bit like a magnet. When the hard water passes through the resin, the calcium and

does. The sodium ion is then ‘kicked off’ the resin bead and the calcium and magnesium take its

place. The resulting water is now considered to be softened.

Eventually, the resin beads become saturated with hardness such as calcium and magnesium and there are no more exchange sites. The water softener will then need to clean or regenerate the resin beads by using a salt to clean away the calcium and magnesium mineral deposits they’ve collected. After regeneration, the excess brine and hardness causing ions are rinsed to drain and the resin beads are populated with sodium ions from the salt ready for use again. This regeneration process is the reason that you need to keep your water softener topped up with salt at all times. Without the salt, there would be no sodium ions to be exchanged with the mineral ions and the water passing through will not be softened.

How can I get a water softener installed in my home?

Not all water softeners are made equal. If you are considering having one installed in your home your local AIWSE water treatment expert should definitely be your first port of call. With a vast choice of water softeners available on the market it’s not always easy to know which one will be best to suit the needs of you and your property. As all AIWSE members are independent and not affiliated to one company, you know that you will be recommended the best option for you, and not just the ‘one size fits all’ approach that you may find with the larger brands. By choosing an AIWSE member to guide you through your water softener installation, you can be guaranteed to receive the very best advice and an installation of the highest quality.

View All FAQ'sFind An Expert

Does My Water Have Fluoride In?